As a young boy I was the one challenging the bully or the bigger kids - even though I wasn't very big. I felt a certain amount of responsibility for the kids who did not have the confidence to stick up for themselves or were the ones who got picked last in sports. When it came time to choose teams,  I didn't mind choosing last because I was going to pick the underdog anyway.  For whatever reason, I had something to prove - and even if we didn't win I wanted to give the overconfident kids a run for their money - and we did!

Looking back, I see that for some reason I've always had a certain tenacity that works with the ability to find the winner in people and put them in a position to win.  Maybe it's because I felt a bit like an outsider myself; being a sort of latchkey kid... the son of a single dad and without a mom.  Whatever it is, I had it when I was little and it stuck with me as I started Seattle Kettlebell Club.   Like when people told me if I left the gym I was Personal Training at that I would never succeed... Thanks, Mike, you motivated me! 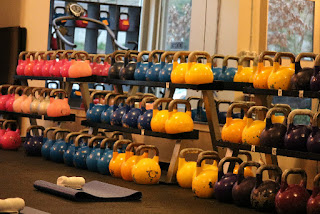 Now I get to meet people of all walks of life who want to start using kettlebells because they need to get in shape.  Often, I'll notice a new member might not have great posture, might have a weak handshake, might generally exhibit less than ideal confidence which is reflected in their physique.  I'll find out later they waited a long time or were really hesitant to join, which is funny because within a few weeks I'll already start to notice the difference.  He stands up straighter, acts more outgoing and seems generally happier while telling me the competitions seem cool but aren't his thing.  Cut to four or six months later when I can't get him to take training days off before his first competition.

These are not your typical athletes.  These are often the kids who got picked last or never even wanted to play, and here they are in their 30's and 40's getting in to something athletic for the first time in their lives and killing it.  Now they have the courage and skills to step up, and when they get on the platform, something amazing happens - they win!  Without fail, our members win!

The humbling aspect of the sport tends to attract people without big egos who are ready to listen and ready to work.  Which means we have a great community and have a lot of fun together and this is also a no BS gym. We don't have time or room for gimmicks.  Come on in.  You'll find functional equipment that makes you stronger and healthier surrounded by the proud underdogs-turned-athletes who appreciate that.

Posted by Nikolai at 6:01 PM No comments: