While most of us endured another wet Seattle winter, Romeo Giron and Chris Kendall spent two months in South Africa. Although they had a blast on their trip, the couple is excited to be back taking classes at Seattle Kettlebell Club.

The purpose of their trip was for Chris to do some work research, but the couple still made plenty of time for beaches, fine dining, and with help from SKC, some serious hiking! 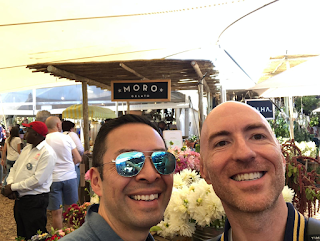 “We were doing a lot of strenuous stuff. I don’t think I would have been able to do that if I hadn’t been [at SKC] conditioning for this long. There’s stuff we did in South Africa that I don’t think we would have done before,” Romeo said.

Chris agrees that their training made their trip more enjoyable, and notes that even though they had never exercised on vacation in the past, they didn’t want to be out of practice when returning to Seattle, so they squeezed in some kettlebell workouts while abroad- talk about dedication!

“In the few months we’ve been doing this, I’m easily in the best health I’ve never been in. This actually works!” Chris said.

Before becoming Seattle Kettlebell Club members, Romeo went to other fitness clubs while Chris was almost positive that gyms were simply not for him. 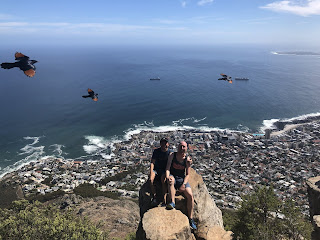 “I was never a gym person,” Chris said. “I would go running or for bike rides. I sort of just had a natural aversion to gyms.”

“It was just a completely different vibe," Romeo adds. "We had done CrossFit, and that was really not our speed. When we came here, we could tell it was a really nice community, and everyone was accepting."

“It seems [at SKC] that the emphasis is on community building and getting healthy as opposed to being competitive with others, which is what I sort of associate with other gyms,” Chris said. "I think this is a great place to work out and get fit for people that don’t see themselves going to a gym. That doesn’t mean that the workouts are in any way easier. SKC is just more welcoming and accessible than a lot of places.”

“Every day is a new challenge. To get us motivated to come here at 5:15 in the morning, it’s got to be really special. I always feel like I’m going to have a good time when I come here, and it’s a great way to start the day. It’s like our cup of coffee,” Romeo said.

Here’s a big shout out to Chris and Romeo for being a part of the SKC community!

For more information on the 21 Day Challenge, follow this link.

Posted by Seattlekettlebells at 5:47 PM No comments: Links to this post

Wonder Woman Wednesday: Selma Dillsi “I’m in it for the long game.”

Before even joining Seattle Kettlebell Club, Selma Dillsi got a taste of kettlebell sport when she attended a competition to a support friend (we miss you, Ellie!). Seeing a competition really broke the wall of exclusivity that Selma had always associated with weight lifting.


“It was the most intergenerational, body diverse, gender, and age diverse group of people I’ve seen throwing some iron around and smiling while doing it,” Selma said. “A jerk looks different on five different bodies. That was something I learned very early on in the sport.”


Although she was active before joining, Selma admits that her workouts had hit a plateau, and SKC was exactly what she needed to take her fitness to the next level.

And she totally did! After being a part of SKC’s team for 3 years and competing multiple times, Selma decided to try something a little different for the IKFF Northwest Kettlebell Championships this past fall, so she completed an event that only the bravest of lifters embark on: the 30-minute one-arm long cycle!

“I wanted to try something with lighter weight that was new and fun,” Selma said.

Selma has not only proved to be an amazing athlete, but her compassionate nature and sunny personality continues to brighten our community. While highly dedicated to her own training, she’s also a constant cheerleader for her fellow Kettlebears (SKC’s competition team).

“I just love the crew. SKC has been part of my community for 3 years,” Selma said. “Some of the folks I met here I consider real genuine friends that expand beyond the four walls of this gym.”

Aside from the community SKC brings to her life, Selma enjoys exercise because of her interest in health, mobility, and the ever-evolving human body. Also, being someone who is partial to endurance, Selma encourages her fellow lifters to lift smart and focus on form versus trying to go super heavy all the time.


“Being a part of a club and community for a few years, I’ve experienced times where my lifting has gone up and down, and that never made me think ‘okay, I’m going to stop lifting.’ I’m in it for the long game, and if that means I have to stop lifting for a period of time to do other sorts of therapy or go down in weight then I’m fine with it. I think that mind set is going to add to the longevity of membership.”

Thank you for being part of the team Selma!

Posted by Seattlekettlebells at 6:23 PM No comments: Links to this post