Nora Porter has strong drive for helping others achieve better health and well-being, which is why being a kettlecoach at Seattle Kettlebell Club is such a fantastic fit. Plus, starting next month, Porter will continue her quest in being someone who assists people by starting school at Seattle Central University where she plans on getting her nursing degree.

“I wrote down everything I wanted out of a job and what I wanted to give to the world, and nursing lines up” Porter said. “I really feel strongly about caring for people.” 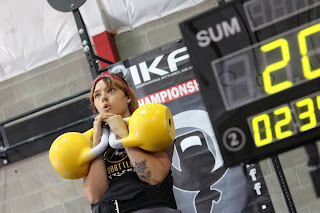 Previously training at Columbia City fitness where she met SKC’s owner Nikolai Puchlov who was just getting into hardstyle kettlebell training at the time. The two would often try out kettlebell moves together. When Puchlov got involved with kettlebell sport, Porter followed in suit.

Porter admits that she does not come from an athletic background, but at this point in her life she sees herself as a “pretty good athlete."

“I was working in the service industry, and not feeling super great about my health or looks," Porter said. “I decided to make some pretty big changes in my life about five years ago.”

Within the first six months of kettlebell training, on top of losing ten pounds, Porter felt more coordinated and had more energy and confidence. She also found herself dabbling in running and other fitness interest.

Kettlebell training has led to many lifestyles changes for Porter as well. She doesn’t drink despite being a part-time bartender at Lottie’s Lounge, and she’s become a way healthier person and claims her only vice is coffee.

“If I want to have a good workout and have good competitions, then I’m going to have to hydrate and eat and sleep well,” Porter said. 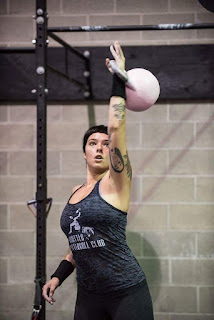 Although being a bartender and fitness instructor seem like polar-opposite jobs, they both allow Porter to bring out her social side, for she loves meeting and talking to people and working in the fast-paced environment.

Outside the kettlebell world, Porter enjoys going to Metal shows and hiking, and since she was young, she’s always liked the aesthetic of tattoos. In fact, she has 16.

“I like being able to curate how I present my body to the world,” Porter said.

Being someone who loves boosting others, Porter enjoys seeing members of SKC gain the confidence and physical strength that they didn’t know they had.

“My heart and desire go towards people who are coming from ground zero because I totally know what that feels like,” Porter said.

Porter says the sport competitions can be super nerve-racking and scary, but being up in front of a bunch of people motivates her to swing her best kettlebell forward.

“I’m a Leo, so I like people paying attention to me,” Porter joked. 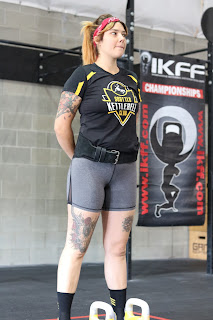 Seeing two of her oldest friends succeed in their dream business is another reason Porter loves being involved with the club.

“Everybody who comes here is a very special and amazing person. The clients are incredible; the other trainers are incredible,” Porter said. “The community that has been built is such an honor to be a part of.”

Porter has been a trainer at SKC for about a year, and she teaches both GAP and Sport classes. To find out when Porter instructs, visit seattlekettlebellclub.com/calendar
Posted by Seattlekettlebells at 4:41 PM No comments: Links to this post

Posted by Nikolai at 8:21 AM No comments: Links to this post

After spending nine years doing CrossFit, Richard Toellner was on the hunt for a workout that is lower impact on the body and had much lower injury rates.

“I was trying to keep up with the young guys, so my body was taking a beating,” Toellner said.

Playing football and baseball, Toellner was always active in high school, and after graduation he spent 15 years in the Army. Even before starting CrossFit or joining Seattle Kettlebell Club, Toellner has always made physical activity a priority, and he has always been an active runner. 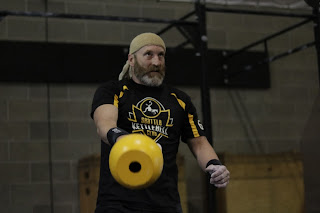 Like many of our members, Toellner enjoys camping and hiking in the area, and he used to compete in rolling techniques, which is a Greenland style of kayaking. He also enjoys talking to people all over the world using Morse code through amateur radio.

After joining SKC back in March, Toellner was coming to classes six times a week and kettlebell training became his main source of exercise. Unfortunately, Toellner has been out of commission recently due to a ruptured disc in his back. However, he would like to note that his injury had nothing to do with kettlebell training. 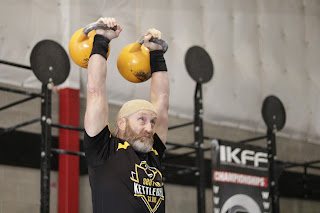 Although he is on the road to recovery and slowly getting back into the kettlebell game, Toellner is “bummed” that he did not get to compete at the Pro-Am competition on the 9th like he originally planned. That would have been his second competition; he competed in the Northwest Kettlebell competition back in September.

For newcomers, Toellner has some advice: ask questions, start out slowly, and be consistent.

Being someone who has endured injury, Toellner also stressed the importance of knowing your limits and giving yourself time to recover. 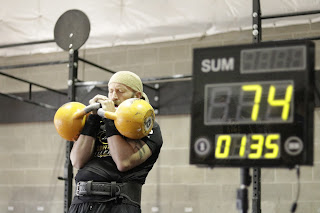 Toellner also stresses the fun of competition because it’s a great opportunity for team bonding.

“I like the comradery especially at this club. It’s a family,” Toellner said.

Meeting his wife when he spent 5 years in Japan, Toellner has been married for ten years, and he has three daughters. He’s hoping that when she is older his eight-year-old daughter will want to give kettlebells a swing.

“[Kettlebell training] is for everyone,” Toellner said. “Men, women, doesn’t matter how old you are.”
Posted by Nikolai at 1:23 PM No comments: Links to this post

When Water Isn’t Enough, Nuun Has You Covered


We’ve been selling Nuun at Seattle Kettlebell Club for a while now, but I must admit I knew little about the product except that it is a sports drink, so I sat down with Ashley Smith, senior marketing manager at Nuun, to find out what the hype was all about.

First, Nuun was founded by athletes and for athletes who were trying to find a way to separate carbs from a sports drink.

“Pre-Nuun, there was nothing on the market that you could consume as a pre, post, or during workout beverage without carb loading,” Smith said.
One of the conveniences of Nuun is the small size of the tube, which is easy to throw in a purse or pack for a weekend trip. Plus. the tube contains 10 servings. Imagine the cost and weight of carrying around 10 Gatorades?

Nuun has a big following among athletes, but Smith says the biggest struggle is just getting people to try the beverage.

Nuun offers three type of products in a variety of flavors: Nuun Electrolytes, which is full of things one loses when they workout, Nuun Vitamin, which has 11 vitamins that people often miss out on daily, and Nuun Performance, which is targeted for long distance training athletes who are sweating for 90 minutes or more.

Smith recommends the Nuun Vitamin for making smoothies, which is her favorite way to mix up the drink. The company has a series of videos on their social media pages (Instagram, Facebook, Twitter) that have recipes for pre-or post-workout smoothie. The most unexpected recipe Smith mentioned was “Nuuntinis.”

“The best kept secret about Nuun is that it is the ultimate hangover cure,” Smith said. "Your body is dehydrated and depleted of all the things that Nuun helps to resupply.”

From personal experience, I must agree with Smith on that last statement. She even notes that she and some of her co-workers have found a way to mix Nuun and bourbon to make a delicious cocktail.

Smith says that a wide number of people who use Nuun are road athletes or triathletes, but she wants to stress that Nuun Electrolytes is great for anyone that sweats during the day or is active in any way such as many of the members of SKC who find time in their busy schedules to squeeze in a workout session.

“This is the perfect product for after an hour-long workout for just making sure you're still on it, fully hydrated and replenished, and ready to go back to work,” Smith said.

Classes at SKC start as early as 5:15am and go as late as 7:45pm, so many members are coming in before or after work, so they may find themselves needing something to boost their day back into gear.

Smith has been with Nuun for four months, and she loves being in an environment where everyone strives to be positive and stay active which are also the reasons that so many members and kettle coaches love coming to SKC.
“Our CEO is a big proponent of everyone staying active,” Smith said. “He truly believes that a happier, healthier staff just has better results all around.”

Anyone that has been in the fitness world knows that there are a million sports drinks and supplements to choose from, but there is a reason that Nuun is superior to those drinks. All the products are also vegan and gluten free, and all the flavors are completely natural.
“Any athlete that is paying to attention to ingredients and read over them on the back of a Nuun package will be convinced,” Smith said. “For any educated consumer, it’s a no brainer.”

For those who may not be as concerned about ingredients, a serving of Nuun only has 10 calories while a bottle of Gatorade has 140.

“If you’re going into a workout, why be 140 calories behind?” Smith said. “Nuun will do the same thing, and leave you feeling a whole lot better.”

According to Smith, everyone she works with including herself are extremely hooked on the drink and do not pretend to love it for business purposes.

“We completely believe in [Nuun] 100 percent, and you can feel it” Smith said.

Nuun is sold at over 5000 places in the US and sold in over 30 countries. To learn more about Nuun and their products visit nuunlife.com/

-Camille Borodey
Posted by Seattlekettlebells at 5:53 PM No comments: Links to this post