"When I hit the CMS mark during my set, I could hear my friends and teammates cheering for me. I still had 45 seconds to go and each rep was a celebration," Moore said. "To hear and feel people's positive energy during a set really provides the support and confidence to reach my best I have on that day."

For the future, Moore hopes to be able to compete with the 20kg bells, and possibly try out some marathon events. 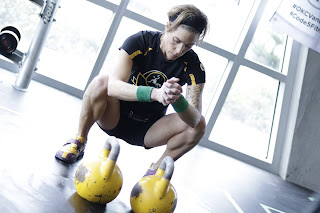 "I want to be a support for fellow Kettlebell lifters in their journey to set goals and train to reach those goals. Crazy Monkey was an exceptional meet for everyone, there were first time lifters, lifters making a comeback, lifters trying new events and many reaching CMS. It was a friendly and supportive environment and I am grateful to be a part of it," Moore said.
Posted by Seattlekettlebells at 1:32 PM No comments: Links to this post

When Patchen Noelke joined Seattle Kettlebell Club 3 years ago, his original goal was to lose weight and get in shape. However, Noelke went above and beyond his original goals, and on June 30th at the Crazy Monkey USA Kettlebell Sport Championship he beat the American Record for 20 kg 10-minute long cycle (105 kg weight class) with 102 reps (the previous record was 87 reps). 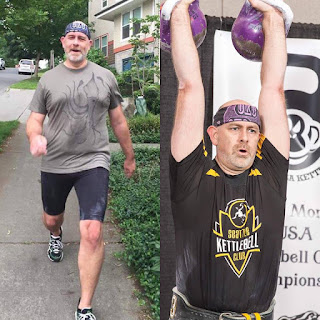 "My favorite part of competing is the crowd. All your team members and kettle family from other clubs out there cheering you on," Noelke said. "I had a plan on how I wanted to get to 100 reps and it's a big mental challenge. I feel such a big responsibility to not let my coach, my team, my kettle-friends down and then I'm always SHOCKED how the whole crowd gets behind you during the struggle and you just know you can do anything at that point. It's feels good to deliver for that group of folks."


Only a few months ago, Noelke broke the American record for 16 kg 10-minute long cycle (105 kg weight class) with 116 reps.  He hopes that at his next competition he'll be lifting the 24s.

"Shout out to KB Fit Brit for keeping and tracking all the records. I hope it motivates people to lift more!" Noelke said.
Posted by Nikolai at 3:16 PM No comments: Links to this post

Recently, Ruben Galvan broke an American kettlebell sport record in biathlon at the Crazy Monkey USA Kettlebell Sport Championship. At the same competition, Galvan also achieved his first CMS (Candidate for Master of Sport) which is not too bad for someone who was training with 8 kg weights when he first gave kettlebells a swing just over 3 years ago.

During his set at the competition, Galvan recalls the encouragement from the crowd as they chanted his name in celebration.

“I had to shake away all my anxiety, fear, and doubt as soon as I started lifting,” Galvan said. “I had to clear my head of everything, and I had to make it happen.”

Galvan says that his diet has improved greatly over the past few years but leading up to this competition, he made a huge effort to cut down on beer, pasta, bread, and sugar, dropping not only 15lbs, but also moving down a weight class for the competition.

Galvan first started showing interest in kettlebells when he was working out at Ridge Fitness, where SKC was holding classes prior to opening their own gym.

“I’ve tried a bunch of CrossFit gyms. I’ve done LA Fitness, 24 Hour fitness, and I just never got in the kind of shape I am now,” Galvan said. “The heavy weight lifting mixed with pure cardio and a good diet really helped turn around my physique.”

Straight from the get go, Galvan appreciated SKC's professional environment, lack of gymtimidation, and how encouraging all the coaches were. In fact, he was so encouraged that it didn’t take him long to get the urge to compete.

“Everybody’s super helpful and supportive unlike what you get at any other gym,” Galvan said. “Keep an open mind. That’s what I did. When I first started with the 16’s [kg kettlebells], I thought there was no freakin way I could go to 20’s.”

Like many members at SKC, Galvan notes that many of his friends and family misconceive what kind of workout he’s doing.

“They think it’s heavy weight lifting training, and it’s not. It’s a whole body workout mixed with heavier weights, but only if you choose to use heavy weights,” Galvan said.

Galvan’s future kettle-goal is to start competing with the 28 kg and 32 kg bells, but his dream is to rival Coach Misha and be able to snatch the 40 kg.

“I want a shirt that says Misha Jr,” Galvan jokes.

Posted by Seattlekettlebells at 2:48 PM 2 comments: Links to this post

Emily Trinks started with SKC just over a year and a half ago when she reconnected with one of the club’s trainers, whom she had skated with for the Windy City Rollers (Roller Derby) back in Chicago.

“Even though I’ve done sports for a lot of my life, I don’t think of myself as super competitive. I’m more interested in performing well versus winning,” Trinks said.

And perform well she did! Last Saturday at the CrazyMonkey USA Kettlebell Sport Championship, her third competition since December, Trinks achieved CMS (candidate for master of sport) in a 5-minute Biathlon with 20-kg kettlebells.

“I don’t believe that fitness looks like one thing, which is something you see so much in social media,” Trinks said. “I know that I’m really strong, and I know that that’s something I’m really proud of and want to celebrate. I don’t own a scale. Yes, I’m a big lady, but I’m strong, and I’m active.”

Trinks has made fantastic strength progress. She used 12 kg bells in her first competition back in December, 16’s at the Vancouver Open earlier this spring (where she also received a CMS ranking) and on Saturday she used 20’s!  With the kettlebell strides she’s made in a short period of time, Trinks encourages those who are hesitant to compete to give it a shot.


KETTLEBELL BIATHLON: 1 SET EACH OF KETTLEBELL SNATCH AND KETTLEBELL JERK. (YOUR CHOICE OF 5 OR 10-MINUTE SETS)

Trinks was also a rower in college, and she compares the sport to kettlebells because of the focus on counting reps, weight volumes, and maintaining a steady pace.

Along with using her Instagram to track her training, Trinks often posts selfies showing herself sweaty after a good workout. She’s focused more on the realistic side of fitness versus the false glamorization that many Instagram models portray. As stated earlier, she really wants fitness enthusiasts to realize that athletes come in many forms.


“It’s all about progress and defining yourself by progress versus anything else. For everyone in the fitness community, weight loss is seen as the goal, and I think that’s where people tend to get hung up,” Trinks said.

-Camille Borodey
Posted by Seattlekettlebells at 4:57 PM No comments: Links to this post