Amanda Stanley has worked out and played sports her entire life, but she feels like she has never been a natural athlete.

“I was the kid who got the most hustle award versus the best player,” Amanda said, “so it’s nice to work out at a gym where the community is so supportive and there definitely is a team, but the focus is very much on you as an individual and how you can continuously improve and meet goals that are meaningful to you.”

“It was really nice to have that clear structure where I had to come four days a week, and there was a reward for doing so,” Amanda said.

Amanda started coming to SKC because of the convenience of the gym’s location, but after taking the challenge, she was hooked!

“I stayed for the community. Everyone here is so friendly and welcoming. EVERYONE works out here. There are all kinds of people, and I really appreciate that," Amanda said.

SKC wasn’t Amanda’s first experience with kettlebells, but she found SKC’s intro class to be much more helpful than classes she’s taken at previous gyms.

“I felt the intro class to be well structured and accessible. I didn’t walk away from that experience feeling intimidated,” Amanda said. “I felt like I was well prepared to go into KettleFIT classes after taking the intro class.” 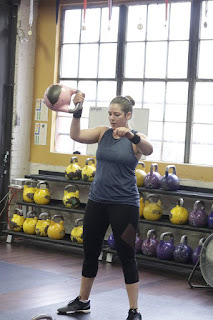 Amanda started by taking KettleFIT classes but became interested in the SPORT once she gained more experience with the techniques.

“KettleFIT classes are so fun. All I have to do is get myself here, and I’ll have a great workout, and it will always be different,” Amanda said. “The thing I love about Sport is that it keeps me focused on a goal, and I can see really tangible progress.”

Amanda credits trainer Dave for encouraging her to train for her first competition, and she lifted at SKC’s Pro-am in December.

“I liked it way more than I thought I was going to. I was super nervous getting up in front of a bunch of people, but the great thing is I felt well prepared,” Amanda said. “The sense of accomplishment I felt afterwards was awesome, and it really encouraged me to keep going and try to lift heavier.”

Since her husband Jarek is an active mountaineer, the couple often spends their weekends hiking, and she credits training at SKC for assisting her hiking abilities.

“One of my primary barometers of how fit I am is how well I can keep up with him on long hikes, and that’s one area in my life where I can tell the difference,” Amanda said.

With a busy job working in digital marketing, Amanda uses her time at SKC as a form of meditation and self-care. She also notes that working out here has also helped her sleep better.


“I never thought coming to the gym would be something I look forward to and would be part of my social life, but I love coming here and seeing the regular crew, and having that community," Amanda said.

Lastly, Amanda praises SKC’s trainers for being educated and focusing on safety during classes.

“I’ve noticed a big difference in the mentality of the trainers here. I’ve never had anyone tell me to go up in weight here. It’s very much at my own pace, which is super empowering,” Amanda said. “You don’t feel pushed or rushed into anything. That being said, they are also very supportive and encouraging.”

Kettlelove:Couple Shares What They Love About SKC

Married for 18 years, Christine Lindquist and Nick Moody were no strangers to fitness before they joined Seattle Kettlebell Club. After 7 years of competing in full distance Iron Man Triathlons, the couple was in search of something they could do together since Nick had some knee issues caused by running. With their background in competitive training, they’ve loved that SKC and kettlebells have allowed them to continue their fitness journeys and set new goals.

However, SKC members already know that we are much more than just a gym, so the couple shares what exactly makes training here so wonderfully unique.

1. The Intro Class is Awesome!

“It was super professional. We were so impressed with the intro session and how thorough Nikolai was with everyone making sure that everybody could do everything in a way that was safe, and they felt comfortable,” Christine said.

“[Training here] is complimentary to what we did before. I would do weightlifting on my own, but it wasn’t really focused. You’d go in and kind of get lost, and you get locked down in a narrow routine of what you can do,” Nick said. “We took some classes too, (at other gyms) but it wasn’t the same.”

“Anybody could walk in here and feel like there’s a place for them, and that they’re not going to be intimidated or disrespected,” Christine said.

“Everybody is nothing but supportive of each other,” Nick said. “Everybody is genuinely excited when you’ve done something you’ve never done before. There’s a comradery with completing challenges together.”

4.      The Coaches and Program Prep Make Difficult Goals a Reality

Nick notes that along with gaining strength, working out here has helped them both build confidence and break fitness barriers.

“Moving up to a ten-minute event is a big deal,” Christine adds. “The first time we competed we watched people do ten-minute sets, and we couldn’t believe it. Then we went through the [KettleSPORT] training cycle, and obviously it was to get us fit for ten minutes, and everybody in that training cycle did a ten-minute event, and they all did great! Now we gotta set some new goals.”

“We love the club. It’s just so much fun” Nick said. “It’s the best place I’ve ever had a membership to.”

“I think the thing that’s been really fun is to see what Amber and Nikolai have been able to make happen in a really short period of time. I cannot imagine any business owners working harder than they do. There’s always something new that they're working on. It’s just constant. They do not rest. It’s really impressive!”

Have a partner or friend you want to share some kettlelove with? Nick and Christine are on our Kodiak Membership, which is a shared membership for two people. SKC memberships are month-to-month and have zero starting fees. Sign up today!

So, you’ve established a solid workout routine, and you’re feeling mostly great. BUT your diet choices may be delaying your progress. I get that eating healthy can be hard, for I love weekend Dim Sum brunches and late-night pizza runs after tasting some micro-brews as much as the next Seattleite, but I also have that voice in the back of my head telling me “you know diet is just as important as exercise, right?” So how can we practice mindful eating while still enjoying our meals and not losing our minds?

1. Don’t Force Yourself to Eat Foods You Hate

Hopefully, you’re not as picky as my freshman roommate who literally ate sandwiches with just turkey and bread, and you only have a handful of foods your taste buds despise. (I’m serious about my roommate: no veggies, no condiments-just turkey in between two slices of bread.)

You should still enjoy your meals even if you’re eating healthy, so if brussel sprouts make you gag, don’t eat them! However, don’t forget to try new things. For example, there was an ungodly time when I thought I hated avocados (I know. What kind of millennial am I?) Just because you didn’t like something when you were 12, doesn’t mean you can’t give it another chance.

I think that this one can often be daunting because the first thing that comes to my mind when I hear “food prep” is those Instagram fitness models who post pictures of two weeks-worth of color coordinated and beautifully prepped meals, but food prep doesn’t have to be photogenic, it just must be practical. It could be as easy as hard-boiling a bunch of eggs or putting some fruit and veggies in containers (Seriously, invest in some Tupperware). If you have meals and snacks ready and on hand, you’re less likely to reach for something unhealthy when you’re hungry.

Look beyond Grandma’s recipes (because they usually include loads of butter and sugar) and Google some recipes. I think one reason we break a diet pattern is because we simply get bored of eating the same recipes, and I’m not saying that cookbooks aren’t useful, but it’s incredible how many internet resources there are for foodies of all meal philosophies. So, take a break from cat videos and memes, and surf for not only new recipes, but also find healthier alternatives to foods you’re craving. For example, try this recipe for Rosemary beet chips in lieu of potato chips.

4. Get Others Involved to Avoid Isolation

Whether you’re spending time with friends, family, or colleagues, food is often a big part of socializing, so it can be easy to isolate yourself from a social event in order to avoid temptation. Instead of dropping your social life, find ways to get others involved on your journey: cook a meal with a friend or significant other, or plan a fun way to get the kids cooking.

Instead of avoiding parties because you’re afraid of the copious amounts of chips and dips, bring some healthy alternatives like these stuffed mushrooms, and show your friends that healthy can also be delicious.

Unless you’re deathly allergic to the foods you’re trying to restrict, technically you can eat whatever you want. Fun fact: when you’re an adult, you can totally eat ice cream for dinner, but you probably shouldn’t.

Instead of saying “I can’t eat this,” say “I choose not to eat this and choose to eat that.” Cutting back on junk food intake actually expands your meal repertoire because you’re forced to think about what you eat.

6.  If Your Plans Go South, Forgive Yourself and Move On

Habits are hard to break, and they take time to form. Celebrate the small victories and don’t beat yourself up over mistakes. You’re going to need to workout consistently to see results, but missing one gym session isn’t going to take away from your progress. These same philosophy applies to your diet. You’re not going to see results by eating one salad, but you’re also not going to undo everything by having one bad day. We’re only human, and there is a reason who crave certain foods, so if you slip up and find yourself face deep in a Big Mac, don’t dwell and obsess. Tell yourself, “I’ll do better next meal," and move on!”

Posted by Seattlekettlebells at 7:22 PM No comments: