Originally from the Philippines, high school sweethearts Noelle Rondain and Nikolas Katigbak were struggling to find a new fitness regime after their move from LA. That is, until they walked through the doors of Seattle Kettlebell Club.

Noelle recalls her first Core-6 workshop being a success, saying “I instantly really dug the vibe. People were cheering others on, and the energy was amazing.”

Nikolas, who notes that he had worked with kettlebells before joining, enjoyed that the Core-6 workshop offered more fitness theory and detailed instruction versus “just throwing weights around.”

Noelle was a competitive swimmer most of her life, but after college admits to falling off the fitness wagon for a few years.

“No joke, Seattle Kettlebell Club is the first gym that I’ve actually stuck to,” Noelle said. 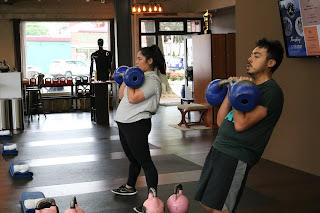 Similarly, Nikolas played tennis in college, but in the past few years he’s found himself flip-flopping between workout routines. Now, both he and Noelle look forward to coming to class and plan their weeks around SKC’s schedule.

Nikolas usually works out in the morning before heading to his job as programmer at Amazon, and Noelle, who works from home on the operations side for an ad technology company, usually prefers to get out of the house in the late afternoon to get her sweat on at SKC.

In their spare time, the couple enjoys walking their dog, cooking, and hiking.  Although they’ve only been in Seattle since August, they agree they prefer the city's lifestyle over LA’s; however, they do miss one thing about LA: Mexican food.

“It’s always hard to get yourself in, but it’s always so rewarding after the class. I don’t even mind the callouses. I feel like an athlete,” Noelle said. 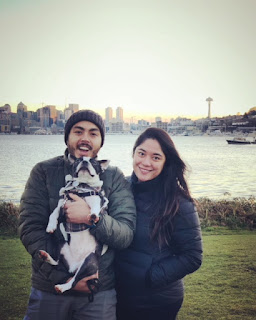 Nikolas agrees, calling the feeling after class a “kettlebell high” and adding that he appreciates the variety of kettlebell weights, so he can alter his workout depending on how he’s feeling that day.
Along with loving the classes, Noelle and Nikolas also appreciate the tight-knit community that SKC offers.

Noelle and Nikolas also discuss the misconceptions they often hear when they tell others about their training. 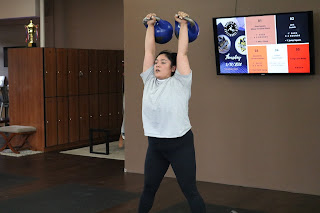 “I talk about it a lot at work, and people think they’re not strong enough to do it,” Nikolas said. “People overestimate how heavy the bells they are swinging are. You don’t come in and swing 50 lbs. right away.”

Both have taken the 21 Day Challenge in the past and agree on being surprised by their results and the amount of reps they were able to increase in merely 3 weeks. In fact, they plan on taking the next challenge, which starts June 3rd.

“I feel like now after the experience of coming here and improving, I could literally say ‘never say never.’ I never thought I’d complete the 21 Day Challenge or enjoy coming to class. I tried KettleSport for the first time, and I said I’d never do that, and I did,” Noelle said.